Hang with the Best®

AS Hanging Display Systems has been active in hanging and display systems since 1964. Manufacturer for more than two decades and having completed over 40,000 installations in North America and beyond, it makes us the worldwide leader for display solutions.

Breadth of product lines, quality of solutions, and professional service enables the company to continue leadership in providing unique hardware support for art, display materials and signage to a vast variety of business categories and institutions including healthcare facilities, K12 and university infrastructure, museums and art galleries, libraries, commercial office buildings, hospitality and small business as well as residential applications. 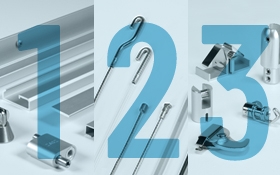 The company announced three new hooks for rods. These are very robust and novel. Also, on the new product side the company extended the Top Clamp line with Top-Bottom Clamps in two sizes.

However, by far the largest effort of the year was the migration to a new web site based on completely new architecture, technology platform and user experience. The advancements are too numerous to list. 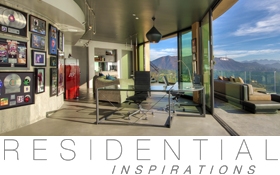 The year saw the company release a catalog titled "Residential Inspirations". To best support the A/D/S community the company developed BIM models of it products. In parallel to this effort the company also updated its 3-part CSI formatted specs. These are very comprehensive and along with the BIM models are hosted at Arcat.com.

Top Clamps were introduced in three sizes to directly attach to either of glass panels or most other rigid substrate and suspend them from any of our steel cables. 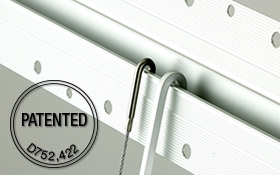 The company introduced the Minify™ Clip and the Poster Hanger. This is a product that allows paper posters to be suspended from our cable-based systems without any other physical attachment or preparation of the poster, such as framing. It is ideal for college dormitories and for merchandising posters in retail spaces.

The USPTO granted a patent for the design of Display Reveal.

The company introduced six new products that create a family called Pro Side Clamps. Patents were issued for the Wall Track End Caps, Grid Ceiling Wall Hanger and the remaining Panel Hook. Also, along the intellectual properties front we were disappointed to find another firm had made a poor decision to infringe on the designs of one or more of our proprietary products. This forced us to exercise our rights and to file a complaint against this party. The matter was ultimately settled to the satisfaction of all parties. 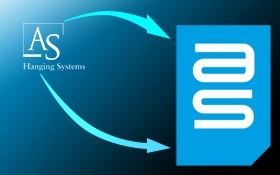 The pace of development increased on several fronts. The company completed a comprehensive refresh of its logo and graphical presentation. It was immediately incorporated into a new comprehensive catalog, a first in the industry segment, and on the website.

The Hang with the Best Blog, after only two years of existence, reached its 100th entry.

Product development included the revolutionary Display Reveal and two variations of two-sided Panel Hooks. Patents were issued by the USPTO on the Rod-End Hanger and two earlier versions of the Panel Hook line of hooks. 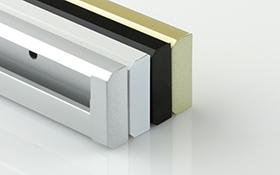 This was a year of product development with the introduction of the Grid Ceiling Wall Hanger, the Rod-End Hanger, the End Caps for the Classic Wall Track, and two Counter-Weight Stabilizers, one each for cables and rods. However, much more significant were the joint introductions of the Panel Hook, One-Sided, Wide and a clip for the Panel Hook product line.

The third generation Mini Hook, introduced in 2012 was granted patent status by the USPTO. 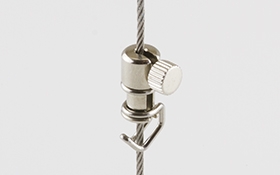 "Hang with the Best" was developed and was granted trademark protection by the USPTO and immediately, the company began a blog by the same name. On the product development side, the company introduced Short Fixed Piers as well as the sleek and sexy Cable Tensioner product line. Also, the Mini Hook, introduced in 2004, then refined in 2009, went "under the knife" and resurfaced in a slotted variation.

The company's products were featured on the very popular women's lifestyle Canadian TV show, Cityline. This was company's second appearance on the show. 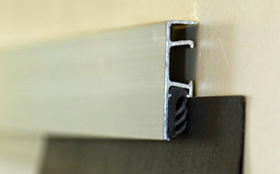 The company exceeded the threshold of 30,000 installations.

Product development saw several new introductions including the Contempo Track Connector; the Barrel-End Cable, our first cast end-fitting; the Twist-End Cable; and most notably, the Casso® Display Rail, which was the first product in the direct hang category, using no cables or rods. 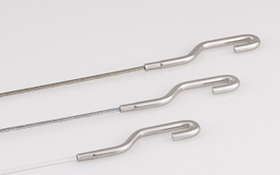 The US warehouse was moved to a larger facility in West Chazy, NY. On the product development front, the J-End Cable was redesigned to better locate the hanging cable closer to the wall. This design also makes the cable-top fitting more discreet. The design was granted a patent by the US Patent and Trademark Office.

This year saw the company introduce a new website, which is referred to internally as ASHanging.com 2.0. Built anew on an advanced technology platform allowed for a number of customer use enhancements, most notably the linkage of the web front end to a CRM, and the workflows for order processing and fulfillment. The entire website was also duplicated in French for the French Canadian market. This allows industry leading customer service, while processing orders within 24 business hours. 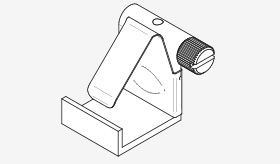 The company was relocated to Brossard, QC, Canada, allowing the facility to grow by 50%. Registered trademark status is received for Footprintless® Easel, Boardless® Bulletin Board and Contempo® Track. Numerous new products were introduced, most notably the "Panel Hook". A patent was issued for this design as were the Mini Hook, Contempo System and the Heavy Classic Hook.

Not all news is good news, however. The company discovered many of its own products and original designs had been sent to China and cheaply copied on behalf of start-up US firm. The brandmark =AS=, first introduced onto cable assemblies, to distinguish genuine AS Hanging System parts from the inferior knock-off, and potentially dangerous, products. 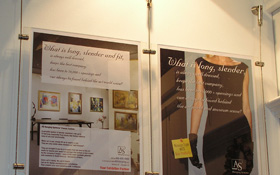 The product line explodes as the Tensioned Cable System and Pocket Display System are added to the line. Additionally, the company begins offering pre-configured solutions for specific applications. These include easels, bulletin boards, real estate listing presentation, restaurant menu display, school project presentation. The trademark, Contempo® Track, is sought to better reflect the product's broad applicability to most any wall and not just curved walls. The company's ad in Architectural Record magazine wins an award. 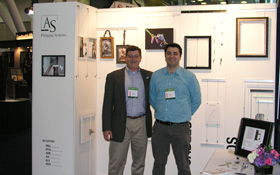 Arts-Supplies.net name changes to AS Hanging Systems to better reflect its evolving primary business sectors. The company constantly improves its Internet presence to deliver product knowledge to the expanding user base.

The company's participation in trade events expands to include the American Institute of Architects. The company is invited to speak at Décor Expo in Atlanta. 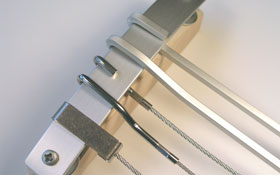 The company's hanging systems activity has now overrun the gallery business and is demanding its own independent space. What is known as Arts-Supplies.net moves from the Sherbrooke offices to a warehouse/production location. The new space expands to 5,000 sq. ft. and also integrates a showroom for local customers. The product line expands further to include a new system that is now known as the Contempo® Track and a wider selection of hooks for cables.

The company's participation in trade events expands to include the Museum market. 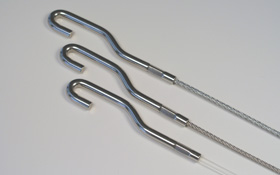 A 3,500 sq.ft. warehouse is acquired in Montreal to better serve growing demand for the hanging system product lines. The website received other updates and enhancements and by now this is an ongoing effort. A new cable design, J-End Cables, are manufactured. Heavy Classic Hook, version 2, is launched. 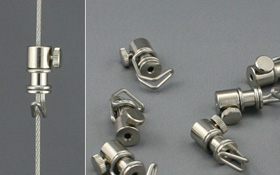 Product Development accelerates in leaps and bounds. Proprietary products are introduced, such as Frame Stabilizers, for both cables and rods. The introduction of the Mini-Hook fulfills the need for a small cable hook. Offices on Sherbrooke Street are renovated and the hanging system operation now occupies the entire 2nd floor of the Galerie de l'Isle. The website undergoes further refinements to provide additional product information and timely order status.

The company participates in four tradeshows. 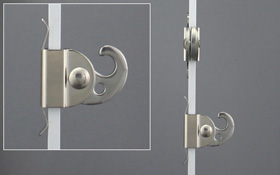 The company designs and produces its first proprietary rod hook, Heavy Classic Hook, this hook fills a missing piece in the Classic System product line. The company participates in its first tradeshow in America.

Walter Moncade integrates the company's order processing, CRM and inventory control into a solid e-commerce site. The company's hanging system offering is split off into this new web presence under the name "Arts-Supplies.net". Also in that year, production of aluminum rods is moved to Montreal.

Introduction of a wider selection of Cable System products is added to the product line and Click Rail Track is introduced to North America. The company exhibits at its first trade show, a small custom framing oriented show in Toronto. 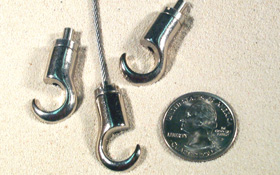 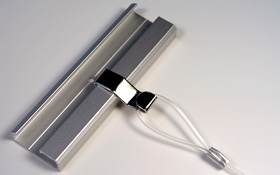 By now the hanging systems side of Galerie de l'Isle has grown to the point where a distribution center is needed. The first distribution/production facility is opened in a Montreal suburb. This provides the opportunity to begin in-house production of multiple products. 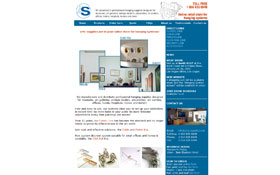 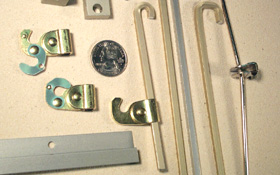 The first of what ultimately becomes a broad collection of specialty hardware fittings is manufactured in Canada. 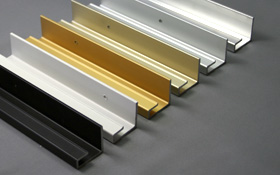 Product development accelerates yet further. Classic Ceiling Track was introduced and the color choices for both of the wall and ceiling tracks were expanded include Silver, Champagne, Gold, Back and White. 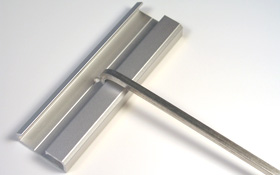 Product refinement takes hold. A track is needed to suit the North American market is developed. The current version of Classic Wall Track was the result and produced here in North America. It has been imitated many times since. 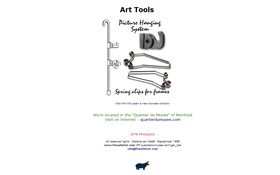 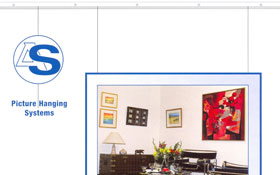 By now, word of the hanging system products offered by Galerie de l'Isle has spread beyond Montreal and Quebec. In order to better serve the growing demand, Mr. Moncade begins Canadian production of early tracks and rods for what ultimately becomes the "Classic System". 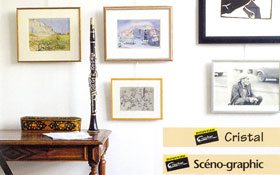 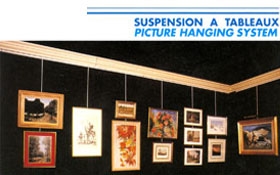 Mr. Moncade brings two decades of experience from his European galleries and with him also comes a rod based hanging system (the predecessor to the current Classic System) for this new North American gallery. 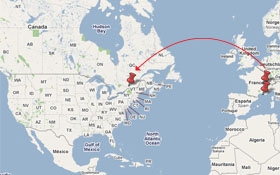 Alain Moncade passes day to day responsibility for the galleries in France to an assistant director in Geneva and opens a new gallery in Montréal, Canada. Galerie de l'Isle opens at 1396 Sherbrooke St. West, facing the Montréal Museum of Fine Arts. 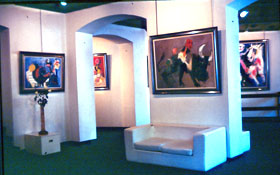 Mr. Moncade's enterprise expands. His skill as a businessman flourishes as he opens a second gallery, La Galerie du Théâtre in Geneva. While promoting art in a competitive environment, he installs and uses a comprehensive hanging system throughout his gallery. Mr. Moncade, offers to his customers a large selection of artworks, sculptures, framing, art restoration and hanging systems. 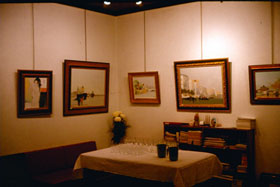 First contact with Hanging System. In the sixties, founder Alain Moncade, opens his first gallery in Toulon, France. The adventure begins as he deploys the old type French Gallery Rods in the gallery. The years go by as he informs and trains the public of these products. Success settles in and remains to this day.